Mistress Sibilla loves to try crazy stuff because she is a kinky mistress. Guys who get to endure what she wants and what she does are the ones who get to have fun with her. With this guy, she wanted to try spit fetish. She was sexily dressed and he was naked. She then had him lie on the couch and she spat into his mouth. The guy was humiliated and disgusted but he kept his eye on the prize.

Mistress July was drooling. She was getting tired of waiting for the food her slave was cooking and since it was smelling delicious and she was starving, she found herself salivating. When she was done, she decided to try the fetish on her boyfriend. She spat on her rubber boots and she made him lick them clean. The guy did as he was told to avoid pissing off his girlfriend as he knew who he was dealing with.

Mistresses Kim and Kate like to do crazy stuff. They are adventurous and had many things they wanted to try out. They spoke about it and decided to try spit fetish first. They got a loser from their school and they had him open his mouth and they spat inside. They made him swallow their saliva before they added him some more of it then let him go feeling humiliated and degraded.

Madame Marissa was pissed at her slave. She had asked him to clean her shoes but he did it poorly so that he could go back and finish watching the movie he was watching. This pissed off the mistress and she punished him for what he had done. She made him lick the dirty soles of her shoes and made him lick her spit off the same soles for good measure. 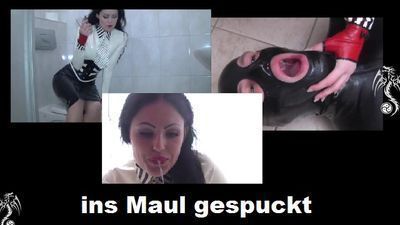